The other day, my older sister asked if I had any plans to attend my high school class’ twentieth reunion. After I pointed out that my twenty-fifth was two years ago (and waved the smelling salts under her nose to revive her) I got to thinking. Yeah, yeah, I know—dangerous. But I couldn’t help but ponder my utter lack of interest in attending a high school reunion. I mean, yeah, I went to my tenth. Mostly because my high school best friend also went, so it was a nice chance to reconnect, but honestly, my attendance was driven more from a morbid sense of curiosity. I wanted to see who would choose to attend and yeah, I wanted to see who had changed—for better or worse. 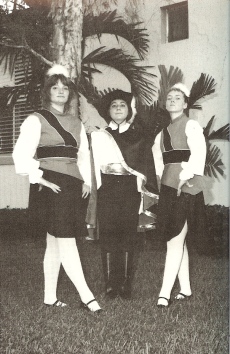 I’m the short one in the middle. I’m still short.

A little background: I graduated from North Miami Senior High School, enrollment 2500, Class of ’85, 520 strong. I was not, despite my involvement in band, much of a joiner. Didn’t do clubs, Student Government, yearbook, newspaper, or anything else. My interests were so focused—i.e. music, music, and more music, in the form of band, drum corps, and the practice required for a concert pianist, that it simply didn’t leave time for any other extracurriculars. Because of the involvement in band and drum corps (in particular) I had a small group of friends with very specific interests and who were spread across a wide age spectrum so to say that I wasn’t in step with the majority of my cohort would be… understating it.

Convoluted way of saying I didn’t fit. And because at that time I was so practiced at being a chameleon and blending into my surroundings, I had no sense of anyone actually knowing or giving a rat’s behind who I was—and this was despite the fact that by senior year I was the drum major of our very successful award-winning marching band.

But you know, boiling it down to its absolute truth—outside of the friends I had in band (and they were pretty few, as well), there weren’t that many people I actually liked in high school. And the other absolute truth is, the converse was true. This isn’t me pity-partying it or looking for hairpats. Just is what it is—I was an oddball who walked her own path during a time when homogeneity is valued and to boot, wasn’t a particularly warm-and-fuzzy person to start with.So no, it was not the time of my life—it wasn’t happy—it’s really not anything I particularly care to revisit, even on an intermittent, allegedly celebratory basis.

But I’m a curious sort (comes with the writer territory) and so when I received notices about my twentieth (how they found me, I have no clue), I kept half an eye on the proceedings. To see who was planning on going and then after the fact, to see the pictures. Yes, I wanted to do a compare and contrast. So sue me, I’m human, y’all.

Basically, the Usual Suspects again. Student Gov, clubs, athletes, extracurriculars, cheerleaders—in short, the Beautiful People. And judging from what little I saw of the proceedings, high school was their highlight and they were trying their damnedest to relive it. Give them props, too—if they’re going to live the cliché, at least they’re committing to it completely.  Another point of interest, considering I went to school in Miami and many of these folks appear to have remained there (which begs the entirely different question of Dear God, why?) I noted an awful lot of Botox and surgical enhancements. A lot. Of course, to balance that out, there were also a fair number of guys who I recalled as being considered hot back in the day, who are now balding, have beer guts, and a lot of mileage on the faces, yet clearly look in the mirror and still think they’re that hot guy from high school.

So yeah- not feeling as if I missed a whole lot there. I honestly can’t imagine that I would have any more in common with these people than I did back then.

Something to be said for being a late bloomer.

Because my high school apparently wasn’t all that great at engendering a lot of school spirit, the alumni couldn’t even muster enough interest to organize a proper 25th reunion. Instead, they had a multi-class reunion for the classes of 1981-86 that happened to fall in line with my actual 25th.

Nope. Didn’t go to that either. Saw the pictures. Usual Suspects. Acting much in the way they did in high school.

I don’t know—maybe when my 30th rolls around, I’ll consider going. Just out of curiosity’s sake.  Maybe see what the reactions are to me, if any.  If anyone actually remembers me.  Frankly, I’d be shocked if they did.  I suspect you’d see a lot of wrinkled brows as they take in who I am now and try to force a recall that just isn’t going to come.

Or  you know, maybe I’ll just stay home and wash my hair.