Subtitled: what happens when Barb is operating on 2.5 hours of sleep and sees a photograph that captures her fancy. The photograph in question: 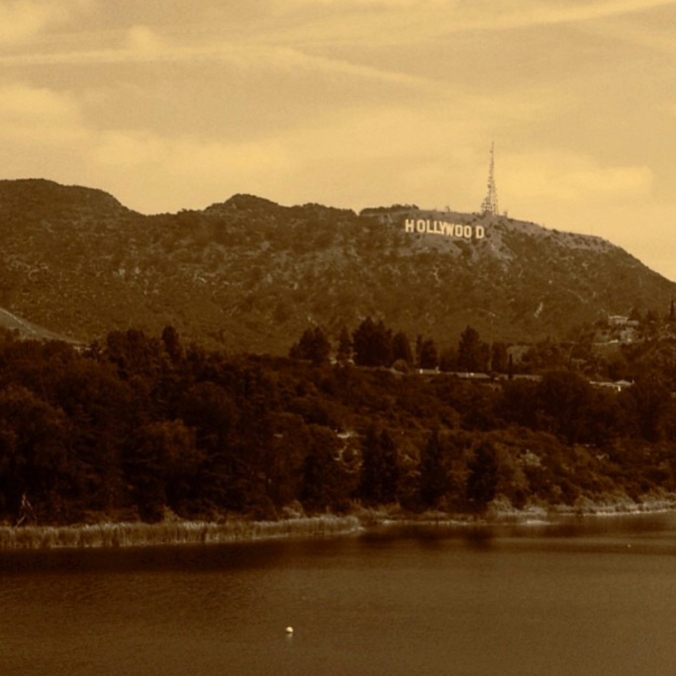 All credit to Arlene Wszalek (@Wzzy) who had posted a lovely full color version of this image taken during a walk around the newly reopened Hollywood Reservoir. I mentioned that it seemed the sort of  image that evoked a sense of Old Hollywood and that I’d love to see it manipulated in a sepia-tint. A while later, voilà—the Lovely Arlene had tagged me in a post whereupon she had applied a sepia filter to the photograph and isn’t it lovely?

My first thought was, “There’s a story there.” (Go on, look surprised, I dare ya.) And lo and behold… a wee drabble emerged.

This is that drabble. Please, keep in mind, 2.5 hours sleep.

With many thanks to Arlene for indulging my idle whim.

No one remembered what it used to look like.

The fruit orchards and citrus groves bisected by wide, quiet avenues and lined with modest Craftsman bungalows and Mission-style houses

Back before Bill Mulholland built his dam, and Woodruff and Shoults had erected that damned monstrosity up on Mount Lee designed to draw people to their “superb environment without excessive cost on the Hollywood side of the hills.” Hell, he hardly remembered himself—he hadn’t been that long out of short pants when the sign went up and not long after, the dam was built, changing the landscape forever.

Of course, it didn’t help—or hurt—depending on your point of view, that as the popularity of the talkies grew and the industry along with it, his quiet, sleepy town had also gone along for the ride—huge swathes of acreage giving way to studios and shopping centers.

He still hadn’t quite forgiven Chaplin for that.

Even so, the area had remained fairly sylvan and peaceful for quite a long time, removed as it was from the City of Angels, proper. Especially up in the hills themselves, lots of trails for a body to take a bracing walk or where a horse could still be ridden in peace. Up there, a body could get lost for days—weeks even—almost forgetting the hustle and bustle that invaded and wouldn’t be beat back. Not unlike a particularly insidious strain of poison-oak.

The one invader he hadn’t minded was the Observatory. There was something so regal and serene about it, clean and white and set at a remove from the ugliness. One could sit up there and feel just a little bit closer to the heavens and that was a fact.

There had been that scare some years back—that lunatic, Hughes, making noises about building up on Cahuenga Peak—something about how his princess deserved a castle so she could oversee her subjects.

Man was loopier than the yarn his grandmamma used to spin.

Then again, same argument could be made for City Council, since they actually voted to grant him permission to build.

Thank God, Hughes had all the restraint of a chickenhawk let loose in a henhouse. Ginger had caught wind of his indiscretions—not that he went to all that much trouble to hide them—and had the sense God gave a goat to give the narcissistic bastard the old heave-ho before she got in too far over her head.

Granted, he might not care for the sign much, but for better or worse, it was a landmark and a damned sight better than whatever that crackpot Howard would’ve seen fit to put up, no doubt overshadowing if not obliterating anything in his path. When one took into account that his next big project after Ginger cut him loose had been the Spruce Goose…

Well—everyone knew how that had turned out.

He paused for a breath and to regain his bearings. It was all changing so fast and yet, at times like this, the setting sun bathing everything in a warm gold glow, he could squint his eyes and it almost—almost—had the look of the sepia-tinted photographs so carefully preserved within the leather-bound albums that were his pride and joy.

They told a story, those albums did.

Just not the story everyone assumed.

They thought he was merely the family historian. The dotty uncle trying desperately to cling to a past about which no one cared.

Oh, but they’d care all right.

If they were smart enough to put together the clues he’d so carefully preserved on those bits of celluloid and painstakingly affixed to the heavy parchment sheets of those leather albums.

Of one thing he was certain—by the time they put it all together, that is, presuming they ever did—it would be far too late to do a damned thing about it. He’d be long gone and the biggest secret of all, gone with him.

Something about that—much like this place he loved so much—made him smile.

With that, he picked up the shovel and began to dig.

2 thoughts on “Vintage Hollywood (A Wee Drabble of sorts)”