You guys have NO idea how excited I am by this one… have been for quite a while. So of course, the week I’m supposed to load it, I have a massive remodeling project going on. Luckily, this one is definitely worth waiting for and even more luckily, I think Jenn will forgive me, since I love her writing so very, very much. 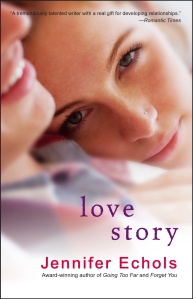 From Jennifer Echols, the award-winning author of Going Too Far and Forget You, comes LOVE STORY(Gallery Books; July 19, 2011; $11.00), a provocative and powerful story of teen romance, set against the bustling world of a New York City university.

For Erin Blackwell, majoring in creative writing at the New York City college of her dreams is more than a chance to fulfill her ambitions – it’s her ticket away from the tragic memories that shadow her family’s racehorse farm in Kentucky. But when she refuses to major in business and take over the farm herself someday, her grandmother gives Erin’s college tuition and promised inheritance to their maddeningly handsome stable boy, Hunter Allen. Now Erin has to win an internship and work late nights at a local coffee shop to make her own dreams a reality. She should despise Hunter… so why does he sneak into her thoughts as the hero of her latest writing assignment?

Then, on the day she’s sharing that assignment with her class, Hunter walks in. He’s joining her class. And after he reads about himself in her story, her private fantasies about him must be painfully clear. She only hopes to persuade him not to reveal her secret to everyone else. But Hunter devises his own creative revenge, writing sexy stories that drive the whole class wild with curiosity and fill Erin’s heart with longing. Now she’s not just imagining what might have been. She’s writing a whole new ending for her romance with Hunter… except this story could come true. 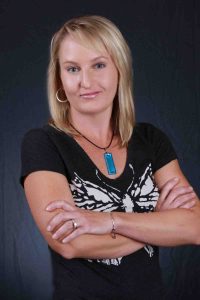 So now, for a little more about Jenn…

Dark or milk chocolate? Milk!
Thin or thick crust pizza? Thin!
Lakes or oceans? Both! Heaven.
Ben & Jerry’s or Häagen Dazs? Häagen Dazs.
Lady Gaga or Katy Perry? (If neither, then who?) Katy Perry. Hilarious.
GLEE or Vampire Diaries? (Or whatever show currently has your fancy) Mythbusters. (Barb’s note: You and my kids would get along great. They have talking Adam & Jamie bobble head dolls.)
Ten or Eleven? (For the Doctor Who fans– if you’re not one, then has there ever been a show or film or book that turned you into a hardcore fan?) X-Files. I was an X-Phile back in the day.
Coke or Pepsi? Diet either.
Growing up, astronaut or supermodel? Astronaut. Our family togetherness TV program was Carl Sagan’s “Cosmos.”

Final question: If your book had a theme song, what would it be?
“The Only Exception” by Paramore.

JENNIFER ECHOLS is the author of teen romantic dramas for MTV Books and teen romantic comedies for Simon Pulse. She lives in Birmingham, Alabama, with her family. Please visit her online at www.jennifer-echols.com.